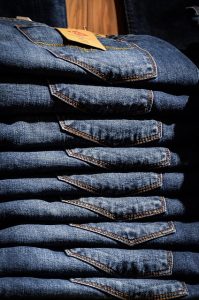 American Apparel, the notorious American-made clothing manufacturer and retailer based in Los Angeles, has been struggling for years. The company rose to prominence after being founded in 1989, but harsh competition has developed from retailers such as H&M and Forever 21 that provide cheaper fashionable clothing for their young customers.

American Apparel has not made a profit since 2009, and in 2014 its founder and CEO Dov Charney was ousted due to allegations of misconduct in the workplace. In August of 2015, the company warned investors that it won’t be able to “sustain operations for the next twelve months,” and American Apparel files for chapter 11 bankruptcy on October 5th.

Filing for Chapter 11 bankruptcy will give the failing company a chance to reorganize while continuing production. The retailer claims that it has already come to an agreement with its creditors on a restructuring plan that addresses 95% of its secured debts. Currently the company employs around 8,500 people in over 200 stores spread across nearly 20 countries but the plan proposed to the court includes shedding some of its unprofitable stores.

The relationship between American Apparel and its previous CEO continues to be rocky, and it is not clear how the bankruptcy will affect Dov Charney. He has continued to attempt to regain control since he was the target of several lawsuits for sexual harassment and ousted from his position.

American Apparel has acknowledged several marketing aspects that have been dragging sales down. The company ignores seasonal planning by continuing to produce swimsuits in the fall and selling the same offerings all year round. This results in a stale sales appeal.

Also, the company’s online presence is weak compared to other clothing retailers. Only about 11% of American Apparel’s revenue comes from the website, while its competitors tend to bring in 20% from online sources.

The new CEO, Paula Schneider, has outlined a new plan to re-establish the company’s image through changes in marketing, products, and store design.

According to the bankruptcy filing, American Apparel lost around $300 million between 2009 and 2015. It listed $199.3 million in assets and $397.6 million in debt. It obtained $90 million in bankruptcy financing from secured creditors. The company plans a debt-for-equity exchange, which involves converting $200 million senior secured notes into stock. Unsecured creditors will receive $1 million payments from a litigation trust.

The company’s leaders are optimistic about its future, stating during the filing that the restructuring plan “will save thousands of American manufacturing jobs and will preserve a true American apparel manufacturer.”