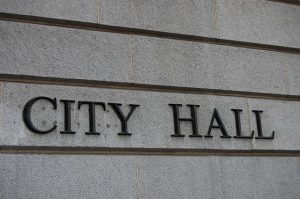 Chapter 9 of the Bankruptcy Code provides for the reorganization of municipalities. These include cities and towns, counties, taxing districts, municipal utilities, and school districts. Although it is unlikely that you will ever take part in Chapter 9 proceedings, they are a very interesting part of bankruptcy law that can have widespread effects.

The first municipal bankruptcy legislature was enacted in the middle of the Great Depression in 1934. When drafting the legislation, Congress had to be particularly careful not to interfere with the sovereign powers of the states as given by the Tenth Amendment to the Constitution. Even with this caution, the Supreme Court ended up declaring the 1934 Act unconstitutional as an improper interference with the sovereignty of the states in 1936 in the case Ashton v. Cameron County Water Improvement District.

In 1937, Congress enacted a revision of the Municipal Bankruptcy Act. This version was upheld by the Supreme Court in the 1938 case United States v. Benkins. The law has been amended several times since then, but is still holding strong. Chapter 9 cases are relatively rare. Since the creation of municipal bankruptcies, there have been fewer than 500 petitions filed. However, since they cover such a large area when compared to other chapters, they can have extensive and lasting results. For example, the 1994 filing by Orange County, California, involved hundreds of millions of dollars in municipal debt.

Chapter 9 bankruptcy provides protection for financially distressed municipalities from creditors while they restructure their debts. This debt adjustment can involve the extension of debt maturities, the reduction of principal or interest, or the refinancing of a debt through a new loan.

Unlike other chapters, municipal bankruptcy contains no provisions for the liquidation of assets and distribution of proceeds to creditors. This type of liquidation would violate the states’ sovereignty over internal affairs from the Tenth Amendment to the Constitution. Because of such restrictions, the bankruptcy court is much less active in Chapter 9 cases. The court is mostly limited to approving the petition, confirming the plan for debt adjustment, and ensuring that the plan is implemented.

Chapter 9 bankruptcy can only be filed by a municipality, which is defined as a “political subdivision or public agency or instrumentality of a State.” This includes cities, counties, townships, school districts, and public improvement districts, as well as some general service providers such as bridge and highway authorities.

When a municipality files for Chapter 9 bankruptcy, there are four further eligibility requirements set by Bankruptcy Code:

When a municipality files for Chapter 9 bankruptcy, they must provide a list of creditors and be assigned a judge. Other types of bankruptcy begin with a clerk assigning the case to a particular judge. However, at the beginning of a Chapter 9 case, “the chief judge of the court of appeals for the circuit containing the district in which the case commenced [designates] the bankruptcy judge to conduct the case.” This provision was designed to keep politics out of municipal bankruptcy cases and ensure that the judge would be able to handle such a case.

At the beginning of the case, notices must be published publicly. Objections may be filed, and hearings will be held for each objection. If the petition is not dismissed because of an objection, the case will proceed.

Automatic stay applies to Chapter 9 bankruptcy and halts all collection actions against the debtor after filing the petition. This protects officers of the municipality from creditors acting on behalf of a prepetition debt.

The bankruptcy court is much more limited during Chapter 9 cases than other types of bankruptcy cases. The court cannot interfere with:

These rules are in place to ensure that the debtor’s day-to-day activities do not have to be approved by the court. The municipality may also borrow money without the court’s consent. Since there is no estate involved, the court cannot appoint the usual type of trustee and cannot interfere with the debtor’s use of its property and revenues. Instead, a U.S. trustee is appointed to the case, but has limited involvement.

Each of these rules is in place to ensure the constitutionality of the proceedings. Otherwise the court might obtain control over a governmental or political affair or property.

Powers of the Creditor

During a Chapter 9 bankruptcy case, the creditors have a more limited role to play. There is no first meeting of creditors, and they cannot propose competing plans. If approved, the debtor’s plan is binding even on dissenting creditors.

There is a creditor’s committee similar to other types of bankruptcy chapters. Its duties include employing attorneys, accountants, or other agents for their own representation, consulting with the debtor, and participating in the plan’s formulation.

Powers of the Debtor

Overall, the debtor has more power over the case during Chapter 9 bankruptcy. A municipal debtor may use its property, raise taxes, and make expenditures freely. It may also borrow money during the Chapter 9 proceedings as an administrative expense and employ professionals without court approval. These aspects are crucial to the survival of the municipality during the case.

Seven general conditions must be met if a plan is to be accepted by the bankruptcy court in a Chapter 9 case:

A municipal debtor receives a discharge in a Chapter 9 bankruptcy case after three requirements are met:

Chapter 9 cases are a rare and interesting aspect of bankruptcy law. Although there are many similarities with other bankruptcy chapters, since municipalities are entrenched within state governmental establishments, the rules have been altered significantly in order to remain constitutional. Hopefully the next time you see a Chapter 9 case in the news you will have a better understanding of what is involved.