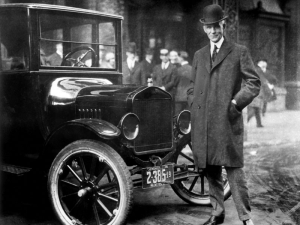 Bankruptcy is stressful and discouraging, but there are plenty of examples of people bouncing back and succeeding after filing. One such person was Henry Ford, the famous industrialist who founded Ford Motor Company.

Henry Ford was born in Dearborn, Michigan in 1863. He worked as a machinist for several years and was hired by the Edison Illuminating Company in 1891. He started working on internal combustion engines, and built his first full vehicle, the Quadricycle, in 1896.

Convinced that automobiles were the way of the future and backed by several investors, he left his job to start the Detroit Automobile Company in 1899. Although Ford was a skilled engineer, he didn’t know much about business or marketing. His first product was lower in quality and higher in price than he wanted, and he didn’t focus enough on explaining the value of his vehicle. Failing to capture the public’s attention, Henry Ford filed for bankruptcy and had to leave his company.

Undeterred, Henry Ford saw bankruptcy as a clean slate and continued with his passion. This time he had more experience under his belt and could correct the mistakes he made with Detroit Automobile Company. He founded the Ford Automobile Company in 1903, and captured everyone’s attention by breaking the land speed record with his invention. Ford forged on by creating the new simple, sturdy, cheap Model T design. He also utilized the famous moving assembly line that increased productivity immensely.

You probably won’t end up founding a revolutionary car company, but bankruptcy does not have to be the end of your career. Learn from your mistakes, and look towards the future with optimism. Henry Ford’s first company fell apart and disappointed him and his financial backers. But he landed on his feet, and so can you.

To find out more about bankruptcy and whether it might be the right decision for you feel free to call Dan Higson at Hathaway Law. 805-644-7111 danhigsonattorney.com