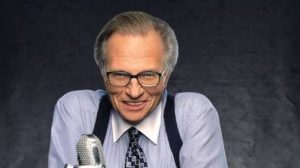 Larry King has been a renowned host on quality shows for both television and radio stations for decades. He has experienced great success since his career took off in 1978 as an all-night national radio broadcaster. But did you know that before then, he struggled to get by financially and even had to file for bankruptcy? Here is a quick version of the Larry King bankruptcy story.

By 1978, King had fallen on hard times. He had already begun his trend of repeated marriage and divorce, which drained his funds to the point that he owed over $350,000 to creditors. That year he filed for bankruptcy.

With his fresh start, King’s luck turned around. He was offered a position to host his own radio talk show, where he quickly became an iconic voice of America. In 1985, he became even more famous on his television show Larry King Live, which ran until 2010 on CNN. More recently, he has been hosting Larry King Now which is available online.

Obviously Larry King did not let debt and bankruptcy control his life. He continually looks towards the future in both his private and public lives, and although I wouldn’t recommend taking the same path that he did with marriage, he does provide a good example for everyone who has experienced financial hardship.